The Three-way handshake begins with the initiator sending a TCP segment with the SYN control bit flag set.

Active Open. In an Active Open call a device (client process) using TCP takes the active role and initiates the connection by sending a TCP SYN message to start the connection.

Passive Open A passive OPEN can specify that the device (server process) is waiting for an active OPEN from a specific client. It does not generate any TCP message segment. The server processes listening for the clients are in Passive Open mode. 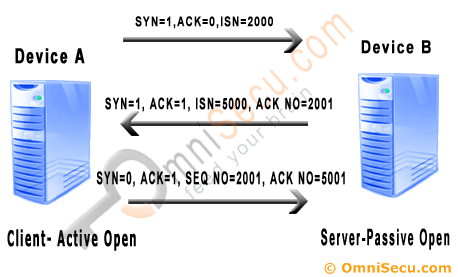 The Active Open device (Device A) sends a segment with the SYN flag set to 1, ACK flag set to 0 and an Initial Sequence Number 2000 (For Example), which marks the beginning of the sequence numbers for data that device A will transmit. SYN is short for SYNchronize. SYN flag announces an attempt to open a connection.

This handshaking technique is referred to as TCP Three-way handshake or SYN, SYN-ACK, ACK.

After the Three-way handshake, the connection is open and the participant computers start sending data using the agreed sequence and acknowledge numbers.

Let us dissect the process of TCP three-way handshake, using a real world example. I am including the Wireshark screen shots also, to understand the concepts more clearly.

I am sitting at my desk and I need to open Google web page for a search. The URL is https://www.google.com. Protocol used is HTTPS over TCP and Destination TCP Port number is TCP 443. I have entered the URL in my browser and hit the "Enter" key.

Topology and IP addresses for TCP Three-way handshake study are shown below. 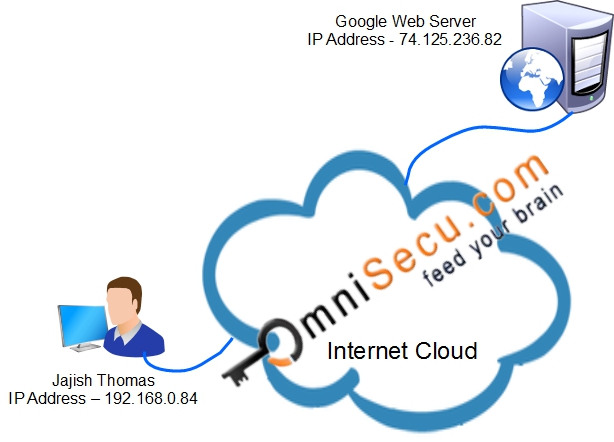 The Initial Sequence Number (ISN) generated by the TCP/IP protocol stack in my computer is 2605483508. Key values for the TCP Three-Way handshake SYN request (Sent from My Computer to Web Server) are shown in below table.

Initial Sequence Number (ISN) generated by the TCP/IP protocol stack running on the Web server is 877776654. The Acknowledgement number 2605483509 is to inform My Computer that the previous data was received successfully. Acknowledgement number poins that the next Sequence Number of the TCP segment from my computer to the Web Server should be 2605483509. Key values for the TCP Three-Way handshake SYN-ACK message (Sent from Web Server to My Computer) are shown in below table.

The final step in establishing a TCP reliable connection using Three-Way handshake is to send back a TCP ACK packet to the Web Server, for the SYN-ACK packet we received in last step. Key values for the TCP Three-Way handshake ACK message (Sent from My Computer to Web Server) are shown in below table.

Once the TCP Three-way handshake ACK message is sent, TCP connection is Established and the computers can now start communicate reliably using TCP.

You have learned what is TCP Three-way hand shake (3-Way handshake), the three steps of a TCP three way handshake and how two TCP devices synchronize. Click "Next" to continue.